Under the impulse of Paul de Montclos, member of the oldest French textile family, our company is committed to authenticity and proximity based on family values and a fierce desire for excellence and innovation. Through the selection of materials and yarns, the unique drawings of our designers, the colorants of our master-dyers, the weaving and making, our teams work with passion to create the linen of tomorrow. At Garnier-Thiebaut, imagination and quality are always part of the plan offering you linen with strong decorative value ...

Our own water turbine produces part of the electricity consumed

Our company is committed to keeping jobs in the countryside of France and to promote our regional savoir faire around the world. 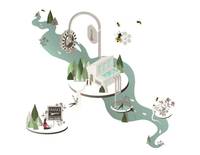 Our history is exciting and our future promising...

1833: Like all beautiful stories, that of Garnier-Thiebaut begins with a wedding celebrated by the merchants of linen, that of Virginie Thiébaut and Jean-Baptiste Garnier. Together, they create the weaving company GARNIER-THIEBAUT.

1944: The factory is destroyed by the bombing of the Second World War. It takes five years for the plant to rise from its ashes and the looms to buzz again.

1969: The heirs of Garnier-Thiebaut decide to sell the family company which keeps its name and soul despite the successive purchases.

1995: Paul de Montclos, the current CEO, gives new impulse to the Vosges company and its men by betting on innovation, creativity and diversification. Already famous in the restaurant and hotel sector, equipping stared establishments, Garnier-Thiebaut is entering the retail market with collections that perfectly master the colors and the refinement of patterns, combined with flawless quality.

2000: Launch of the American subsidiary.

2006: Garnier-Thiebaut is one of the first to obtain the 'Entreprise du Patrimoine Vivant' (living heritage company) label.

Today:  The company continues to invest to remain at the forefront of technology and innovation.